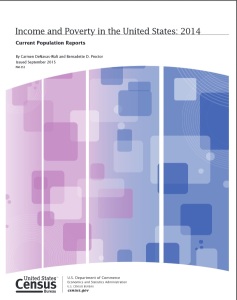 For the fourth consecutive year, the number of people in poverty was not statistically different from the previous year’s estimates. See “Income and Poverty in the United States: 2014.”  In 2014, the official poverty rate was 14.8 percent – 46.7 million people living in poverty.

Why is that important? Because the reality today is that children from low income families are less likely to graduate high school. In fact, in some states, the gap is really quite large.

From a policy standpoint, we need better strategies to assist low income parents in getting a job and in getting a job with higher wages. The Temporary Assistance for Needy Families (TANF) program allocates funds to states to assist families, but over the past two decades, states have only spent a tiny fraction of the funds they receive to support work strategies for these parents. There is no question, TANF is in need of reform. The House Ways and Means Committee has held several hearings this year and in July released a discussion draft to revamp the program to be more effective.

Assisting parents is one strategy to reduce poverty. Another strategy is to stop the cycle of dependency by investing in children. What we know about families with young children is that they need child care in order to work. A few are lucky and may have relatives available, able, and willing to assist with child care. However, most families are not so lucky, particularly low income parents who cannot afford market costs for child care.

Studies show that high quality child care makes a difference for all children, but particularly for low income children. One of the main goals of the Child Care and Development Block Grant (CCDBG) Act of 2014 is to increase the number and percentage of low income children in high quality care. The message is clear: child care is a key work support for parents, however, it is also a setting that should promote the healthy development of children. For low income children, starting school ready to succeed can lead to an increase in the high school graduation rate of low income students (which is currently 15% below their more economically well-off peers).

Unfortunately, over the last couple of years, CCDBG has served fewer and fewer children. A few months ago, the FY2014 CCDBG data was released, which showed that 1.4 million children received child care assistance each month – a reduction of 48,800 children from FY2013. And, the 1.45 million children who received assistance in FY2013 was a reduction of 47,500 children from FY2012. Therefore, in the last two years alone, nearly 100,000 fewer low income children have received child care assistance.

We know families on welfare need child care in order to work. We know low wage working families struggle with the cost of care and that child care assistance enables them to access higher quality care than they otherwise would be able to access. Does the quality of child care that low income families have access to really matter? The research demonstrates that it does. The neuroscience reveals that brain development, the wiring for social and emotional development as well as cognitive development, is formed in a child’s earliest years.

When the Census Bureau released the newest poverty data, House Ways and Means Committee Chairman Paul Ryan (R-WI) said, “This data should be acceptable to no one…. Our current approach to fighting poverty, though well-intended, is failing too many Americans. Solving the poverty challenge will require us to go into poor communities, customize approaches based on people’s needs, and focus our resources on what produces results. Rather than just treating the symptoms of poverty, our goal must be to help people move from welfare into work and self-sufficiency.”

Chairman Ryan is right. Another year with no reduction in poverty is unacceptable. However, to reduce poverty, a “parent-only” strategy is only half the battle. We need to focus as well on the low income children in these families so that the path forward is not another cycle of poverty but a roadmap to complete high school college or career ready. The gateway to a new roadmap begins with high quality child care.